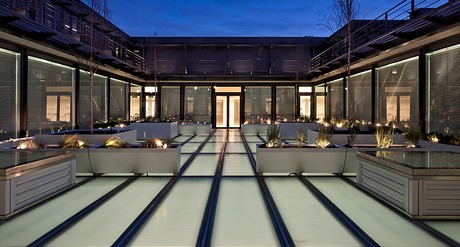 The initial design requirement in relation to the fire alarm system was to identify how many sensors & devices were required to comply with the type L1 design brief. MECE had already established that the complex C & E would require a very powerful & reliable fire alarm network and to this end the Notifier ID3000 product had been selected.  With over 2000 sensors & devices to control, it was agreed with the Consulting Engineers (Arup’s) that we would install two number, eight loop fire alarm control panels. Each of these panels is capable of controlling 1,584 sensors and devices (99 sensors & 99 modules per loop).

A single fire alarm panel had already been selected for the FCC room (to control the Sprinkler & Fireman’s panels) and an additional panel was installed in the basement area for the FM service providers. These two panels and thirteen repeater panels were all networked together via the extremely reliable Notifier ID2net network package to form one complete system.

The most complex issue of design related to the C & E for the fire damper control. Numerous meetings and discussions were held on and off site with the Electrical Contractor (SRW), the Consultants (Arups) and the BMS Contractor (DWEC) until we had all the information necessary to enable us to design the system and produce the drawings. A further meeting was then held to sign off the design to enable the fire alarm installation to commence.  This included the layout and engraving of the sprinkler & fireman’s panels.

Commissioning of the fire alarm system was carried out on a floor by floor basis (9 floors) including the full testing of the smoke dampers and the complex alert & evacuation signalling that was split into six zones across each floor.

A final ‘Black Building’ test was carried out across three days, where each individual line of cause & effect was tested, witnessed and signed off.

A unique aspect at UCLH was the protection of two Atrium areas that had to be protected by a water deluge system. The design team were obviously very keen to avoid any false alarms in these areas and to this end had specified the use of flame detectors. These were to be programmed on a ‘double knock’ basis to control the deluge system and also had to be ‘influenced’ by an optical beam detector, effectively providing a ‘triple knock’ system. MECE were very concerned that a even though the C & E was being controlled via three different sensors, the signal to the deluge system still only came from one single interface unit and if this was to fail for any reason, the deluge system could be activated. Following numerous meetings and after taking our advice, it was eventually agreed that the flame detectors would be controlled by their own standalone control panel and the beam detectors would be installed on the building fire alarm control panel. An interface was provided on each individual system and the signal for the deluge system is wired in series through the two interfaces. This provides the maximum possible security against the accidental activation of the deluge system.

A combined disabled refuge/fire telephone system is provided for the two main stairwells. The reliable Baldwin Boxall Omnicare system was selected for this purpose on the basis that the system is wired in a ‘ring’ format which provides the maximum possible security in the event of a cable fault i.e. a single cable fault will not result in the loss of any outstations.