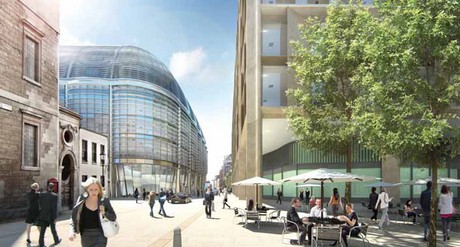 The initial design requirement in relation to the fire alarm system was to identify the likely expansion requirements for the open floors (1st to 8th). Although the floors were open plan, the design brief stated that the area was to be split up into four tenant areas (zones A –D). MECE had already established that the complex C & E would require a very powerful & reliable fire alarm network and to this end the Notifier ID3000 product had been selected.  With 32 Areas to cover, it was agreed with the Consulting Engineers (Roger Preston & Partners) that we would install four number, eight loop panels for the tenants areas. This would enable us to leave one loop for each zone and with capacity for 198 devices this was within the specification we had been given to allow for 75 addition points per zone.

Hence we were left with eight number, eight loop panels that were all networked together via the extremely reliable Notifier ID2net network package.

The most complex issue of design related to the C & E for the fire damper control and monitoring. Numerous meetings and discussions were held on and off site with the client (Minerva), the Architect (Foster & Partners), the Builder (Skanska), the Electrical Contractor (SRW), the Consultants (RPP) and the BMS Contractor (DMS) until we had all the information necessary to enable us to design the system and produce the drawings. Further meeting were then held to sign the design off to enable the fire alarm installation to commence.  This included the layout and engraving of the sprinkler & fireman’s panels.

Whilst this process was time consuming, the fruits of the labour were rewarded during the construction and commission phase when the systems were successfully witnessed tested and handed over.

The VA system was designed in accordance with the specification and clients proposals and requirements, which also had to include 100 Watts of spare capacity for each of the tenants area’s (A & B Circuits) to be fitted out at a later stage.

Due to MECE’s past relationship with Baldwin Boxall, their product was selected for this application, due to its flexibility and reliability.

A factory acceptance test of the VA/PA racks at Baldwin Boxall’s facility in Crowborough was organised prior to the equipment being delivered to site to check the operation in accordance with the Roger Preston Checklist:-

All tests were completed successfully and signed off by Roger Preston & Partners, Skanska & MECE, prior to the racks being delivered to site.

A combined Fire telephone and Disabled Refuge system had been specified, however the Architect, Foster & Partners, had aesthetic considerations for the lobby areas and didn’t want an ‘off the shelf product’. By working closely with the Architect and Baldwin Boxall, producing drawings & samples, we were to design a totally bespoke product that meet both the requirements of the Architect and the relevant British Standards.

The above communication system was combined with the disabled WC call alarm system, with front ends located in both the FCC & FM offices.