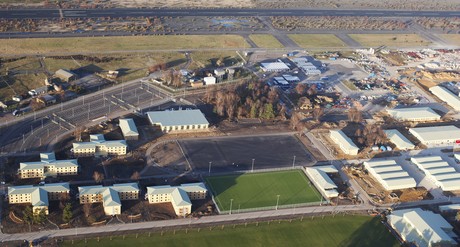 The main objective of the Woodbridge project was to modernise a disused RAF base in order to house the 23rd Engineer Assault Regiment.  This involved both new build and development of existing structures to provide living accommodation, training, medical, sport / leisure and vehicle maintenance facilities.

MECE’s surveying team were asked to design various systems to comply with the contractual requirements detailed above and to provide quality assurance survey checks at all phases of construction.

The initial design requirement in relation to the fire alarm system was to identify a ‘tried & tested’ product that would sit comfortably on the fibre optic network. The Kentec Electronics ‘Syncro’ & ‘Solo’  panels  were initially considered for this application as a number of the buildings had no more than 20 devices associated with them and this fitted well with the single loop ‘Solo’ panel.

However, in discussion with the MECE commissioning engineers, they raised their concern that the Kentec network system (installed by others at Portcullis House, Palace of Westminster and now maintained by MECE), only allowed limited lines of cause & effect to be used across the ‘hard wired’ network. In addition to this Kentec confirmed that their panels had only ever been networked across ‘fibre’ on one project prior to this.

This was obviously a major concern, especially with 24 different panels to control and hence the decision was made to use the more expensive Notifier panels. The Notifier ID3000 fire alarm control panels had been used by the designer on fibre networks on numerous projects including a number of military sites i.e. RAF Lakenheath, RAF Mildenhall, RAF Watisham, etc. In addition to this, Notifier had a dedicated fibre optic network card and did not rely on RS485 convertors which was the basis of the Kentec network.

Once this decision had been made, we then moved forward with the design of the individual buildings selecting the most suitable devices from the Notifier range of products. This involved suggesting and using ‘multiple criteria’ detectors in the accommodation rooms where false alarms are notorious from effects such as steam from the shower, burnt toast and tobacco smoke.
Air sampling (Vesda) type systems were also employed in areas such as the lift shafts and Gate house cells to aid with the maintenance of the systems and the difficult access issues that may be encountered.

The Fire alarm systems were commissioned and witnessed on a standalone basis at various stages of the programmed works before being brought onto the fibre network at the later stages of the project. A full commission and witness of the compete networked fire alarm was then carried out with all 24 panels on-line.

A ‘Base wide’ Public Address system known as a ‘Barrack alarm Broadcasting System (BABS)  was required to cover 16 buildings as well as a number of external areas such as the sports fields, drill square and car parks. This was to be controlled from microphones located in the Visitors control centre and security control room. The system is not related to the fire alarm system in any way, however a decision was made to monitor the circuits for fault as the BABS could be used for emergency announcements relating to bomb alerts and other security matters.

The first priority in terms of design was to establish how the system would be ‘cabled’ around the site and it made perfect sense to make use of the fibre optic ring that was being used for the fire alarm network.

Due to our relationship with Baldwin Boxall our initial thoughts were to use their tried & tested range of equipment, however it soon became apparent that they had only used fibre optic networking on a couple of very small systems. Further to this, in order to use their ‘fault’ monitoring system it would be necessary to provide full battery back-up and reserve ‘hot’ amplifiers, which was not a requirement for this project.

In view of this we turned our attentions to a company called Advanced Safety Communication (ASC) who we had worked with at the Cabinet Offices in Whitehall.  Whilst Baldwin Boxall are our preferred supplier, ASC had already installed equipment in Whitehall and we had to expand this system to a further three buildings. This was achieved by installing an additional three VA racks that were networked via fibre to the existing  VA system.

Following discussions and meetings both on and off site, we developed a system with ASC that consisted of 16 PA racks located in the plant rooms of the individual buildings. Single ‘Fault monitored’ radial circuits were installed to supply the speakers and the Amplifiers were networked together via the fibre optic ring to form one complete system and zone.

We also worked closely with Peter Alberry-King from Penton UK to select the correct speakers for their application and this was especially relevant to the external areas. Once a suitable speaker had been selected, Penton came to site with a 230 Volt generator and amplifier and we carried out a number of tests to ensure that the speakers selected were suitable for the application intended and perhaps more importantly that they were positioned correctly for the best possible volume and intelligibility.

Once MECE/Penton were happy with the design, our proposals were demonstrated to the Client and Consultant, again with the use of a 230 Volt generator and amplifier and the system design was effectively witnessed prior to our installation even commencing.

On conclusion of our installation, the complete system was tested and commissioned and the client and consultant again witnessed the system. Although it was not a requirement, this also included a number RASTI tests that were used to demonstrate good speech intelligibility of the BABS.