An existing school site with a Grade 2 Listed building “Block E” to be incorporated within a campus of 5 other Buildings.

Its unique situation is that it will house Infants, juniors and Secondary school all on one site. 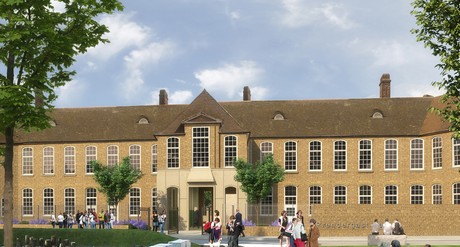 Methodology Of The Fire Alarm and Detection System :-

The initial design requirement of the AR’s and CP’s in relation to the fire alarm system was to design a system that will allow for the early detection and evacuation of the 3 schools.

MECE had already established that the complex C & E would require a very powerful & reliable fire alarm network and to this end the Notifier ID3000 product had been selected.  With 32 Areas to cover, it was agreed with the Consulting Engineers ( Brydenwood  ) that we would install three number four loop panels in the three receptions and 1 x FARP for The FM office to allow for easy Interpretation of an alarm, Genuine or Unwanted.  These three panels monitor  530 detection devices.

It was agreed that NO Time delay would be incorporated into the system as per the instructions of the Local Authority after various Meetings and  discussions with The Fire Officer,  the school  and LBL due to the various schools being in fact one building.

All FAP and FARP panels were networked together via the extremely reliable Notifier ID2net network package.

It was decided that MECE could offer the Dual Detection “ Multi Sensor”  by Notifier  in all class rooms and this was taken up by The Authority. It was decided that all classrooms would benefit from dual Heat and Optical , with the benefit of just Heat detection in the laboratories, Science, Cooking,  Workshops , and Hair salon classrooms during the school day and then optical detection during out of hours time including weekends.  Other classrooms used both technologies to trigger an Alarm and it was agreed that the corridors and circulation areas had Only Optical detection.

Whilst this process was time consuming, the fruits of the labour were rewarded again during the construction and commissioning phase when the systems were successfully witnessed tested and handed over and praising comments from the Local Authority and the fire officer.

The PA system was designed in accordance with the specification and clients proposals and requirements, with the class change signal incorporated into The PA system.  Originally the site only had 4 zones (3 schools + External), but once MECE had discussed the different school’s  need’s  it was established that 11 zones would be needed across the site with 3 different class change signals also required.

The upgrade of the PA rack was carried out without any effect on its intrusion within the FM room.
As the system was not overly complex and cost was a major factor, TOA and their products were selected for this application compared to Baldwin Boxall  & Penton . External Beacons were installed via PSU’s and the fire alarm system for the Class change, at the request of the school for the hard of hearing.

A combined Fire Refuge and Disabled WC system had been specified.  By working closely with the Architect and Baldwin Boxall, producing drawings & samples, we were able to select a product that meet both the requirements of the Architect and the relevant British Standards.

The above communication system was a totally combined with the front ends located in each of the three Reception areas & the FM office.

To give us an edge against our competitors  we decided on the Honeywell system due to its ease of installation and its Mapping Graphic that is very easy for FM contractors to use. In the past, various Graphic packages and systems have been too technically involved for the Caretakers to use.  We have past experience of Honeywell on HMP Prisons and other schools.

The Honeywell HD3CX camera was used internally, with the HCD484LX used externally, with the exception of E Block, where the HD4 Dome was used after discussions with the Architect. The cameras were wired back in coax cable( Rather than IP as the AR’s were quite clear)   to a local DVR located in the nearest relevant hub room (various blocks). The DVR’s and Switch’s were Located and positioned in 4 Locations in separate 19’’ racks provided by the IT contractor.

The DVR’s were connected together via a Fibre Optic V-Lan installed by MECE to form one complete system.

The DVR’s would normally retain information for a minimum of 21 days however this will depend on the recording rate that is required.

The front end work stations are located in the FM office and The Main Reception in E Block , with the system can be controlled directly from the DVR or via the mouse. A Full Graphic Map package was installed.
With the Honeywell system there are two options for remote client monitoring. HFRVS can be connected to one DVR whilst HFVMS single workstation can connect to multiple DVR’s. The HFVMS was installed with a Mapping system Graphic of the site.

Originally the System was to be viewed over 32 number  17’’ monitors  located in the FM room, however after meetings and discussions it was found that with the Honeywell  HFVMS and  the mapping was sufficient using 2 x 19” screens in two locations with entry spot monitors located at the 3 entrances.

The recording rates would have been discussed with all and set as per the Clients requirements.  A data Protection pack and CCTV Signage was supplied and the FM provider Babcock and they were advised to Register the system with the Data Protection agency.

A calculated UPS system was later added by MECE on the request of NG Bailey for 3 hours duration as MECE call out facility would be a 3 hour response time as agreed within the service contract with Babcock FM.

“No Blind spots  and a Fully Monitored CCTV System “was the brief from  the Authority requirements and that is what MECE Achieved after hand over, with a very satisfied Authority and FM contractor in Babcock International.

The installation was designed in accordance with British Standard EN50131 and the additional requirements of the police (ACPO 2000) policy and DD243:2002 for remote signaling systems after discussions with The Authority and the Local Metropolitan Police crime Prevention officer all to G2 standards.

The school system consists of a medium size Intruder Detection system consisting of 98 Optex Dualtech Detection devices located within any area consisting of entry from the Fresh Air or Openings ie Windows, doors etc, with 90 Heavy Duty door contacts. All Detection is facing into the building and covering all External doors, as per the manufactures recommendations unlike other contractors who literally save money by installing on the corridor side of the room with the device facing the windows. All  schools MECE have been involved with in the past 10 years are installed in this fashion as per NSI, EN50131 and manufactures recommendations. Others do Not.

First Floor Corridor Dulatech PIRs have also been installed on the recommendations of MECE from Past  School and College experience and after discussions over future use of 1st floor classrooms( ie Apple Mac Computer  Suits)  and discussions with all parties. The 2nd floor Balcony’s( Flat Roof)  also has been protected by Heavy Duty Door contacts and Dulatechs PIR’s on the recommendation of The CPO.
The main control panel is located in a secure location within the premises as are additional nodes located around the building In Secure Locations also .
All devices are actually   G3 Not G2 , Anti tamper and Anti–Cloak  and the coverage of the Dualtech  PIR’s ( Passive Infa Red and Microwave )  detection  is 12.5m mounted at 2.4m as per the manufactures recommendations with a Coverage angle of approximately 82 Degrees . This was considered on the design phase and extra detction devices were needed.

Both Technologies need to be triggered  from The Dualtech detector simultaneously to generate an alarm or If Ether Technology detects a prolonged Intruder activity an alarm will be generated.
1 x Keypad  and Set Button is provided in the main reception area and  also four additional areas’ which will enable the area’s to be individually set/unset.  For out of hours use etc .
The capacity of the batteries is sufficient to maintain the system in operation for at least 24 hours, after which sufficient capacity will remain to provide an ‘Alert’ signal to the building for 20 minutes.
A confirmed alarm condition will only be generated if two or more devices off the entry route are activated, and only following expiry of the entry time i.e. the police can be called, if required.
The system is capable of Full Police response.
A FULL empty Building test was witnessed by our client NG Bailey, Babcock and The Authority LBL.

Designed to the AR’s and CP’s and to the consultants W40 specification.
After Various discussions a “Be Spoke”  access control system was installed.
SALTO and Ingersoll Rand were discussed but due to the nature if the school and   MECE’s experience with the Brunel University with IR and The West London College with SALTO , it was discussed the Advantages and dis- advantages of both systems with SALTO being preferred  also by the Authority, mainly due to the fact that the 3 Tester school already had SALTO Installed.  .

It is the client that understands their requirements and needs, and with MECE specialist help and advice as a  SALTO Integrator every Class room had a Salto Lock Installed, with Strategic Hard Wired (Live) door Readers installed to transfer and an Receive information and data. All Parties the School, N.G Bailey, Costain, Babcock FM, the Authority and the Architect were involved in giving the school a “Bespoke”  SALTO access control system, giving the campus a Virtually “ Keyless site. Even padlocks provided later were SALTO.

All door controllers had separate individual Fire alarm interfaces interrupting the supply to the Lock on a Relevant Fire Activation. This was determined on a cause and effect matrix supplied by MECE to all parties.

This first element of the Access control system comprised proximity access card readers to be fitted to various agreed  doors on site. These doors were be controlled by field door controllers located adjacent to the door (one controller per door) which in turn was linked via a standalone IP data network via MECE Installed and commissioned, Switches to a central control programming and monitoring PC, to be located in the main reception of Block E. Doors were released by either an access control reader on the exterior or a push button at the exit / secure side of the door.

The second part of the access control system is the various doors around each site that were to be “locked down”  at various times of day. These doors are controlled by field door controllers that are linked back to the central PC via the same IP data network as described above. The PC software was programmed for the Requested doors to release or lock down as required by the client either as a global command to every door, groups of doors or by a door by door basis. Especially between the Infants, Primary and secondary schools.

Every Class room has a Salto Lock Installed , with a battery function for some 4-10,000  operations/events.

Door mags to each door or each set of double doors  having access control was discussed,  as Block E had Height Mounting  problems so a Recessed Mini Shear mag was  proposed and used .

MECE proposed a BPT 200 System as being the Best system for the school compared to Comelit, Videx and Paxton. The system consisted of originally 8no Entry Video intercoms with Salto access control and then increased to 14 No Entry and Exit Points with 3 handset Monitors and then had to be changed to a BPT  System 300 to accommodate the extra Points  with a call waiting system at the Infant, Kitchen and Secondary receptions. The system did not have to be fully  DDA compliant as discussed with all parties. So after installation it was decided it did have to be so MECE Modified the Units to allow for the “ RED” LED to illuminate when the Mag Lock was de-enigised