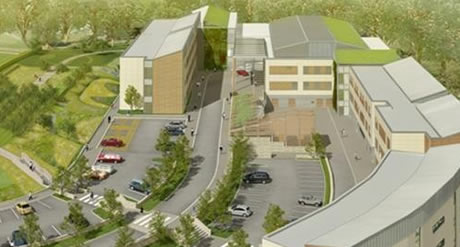 Maidstone is a recuperation block consisting of 90+ private rooms with on-suite facilities.

Kent & Canterbury buildings are surgical areas and consultation rooms, whilst Clydesdale is an administration building.

The initial design requirement of the AR’s and CP’s in relation to the fire alarm system was to design a system that will allow for the early detection and phased evacuation of the hospital. It had already been established that the complex C & E would require a very powerful and reliable fire alarm network and to this end the Notifier ID3000 product was selected.  With 40+ small evacuation areas to control in accordance with HMTL requirements, we installed four number 4/8 loop panels, one in each of the four buildings.  Repeater panels are installed at all nurse stations and the final system comprises of 4 Control panels, 24 repeater panels and over a 1000 detectors and sounders.

It was decided that a double knock system would be incorporated into the system on a zonal basis, with only very small areas of the hospital being evacuated at a time. The size of these areas were discussed and agreed with the client after various meetings and discussions with the local Fire Officer .

All FAP and FARP panels are networked together via the extremely reliable Notifier ID2net network package.

It was suggested by MECE that we should install the Dual Detection “ Multi Sensor”  in all common parts of the hospital and private rooms to provide maximum security against unwanted alarms. This suggestion was taken up by The Authority. The detection in the remainder of the site includes detectors selected for their relevance to the areas they were fitted in i.e. heat detectors in kitchens and theatres, smoke detectors in store rooms, etc.

A complex system for monitoring and controlling the status of the smoke dampers was also required and is fully controlled by the Fire Alarm System.

A 100% test of all detectors and interfaces was witnessed by the client’s independent certifier and a final ‘Black building’ test was successfully carried out at the conclusion of the works.

A Disabled refuge system had been requested for the Clydesdale building.  By working closely with the Architect and Notifier, producing drawings & samples, we were able to select a product that meet both the requirements of the Architect and the relevant British Standards.
This communication system consists of remote intercom units on all staircases, with a front end located in the main reception area .

A complete system consisting of 43 cameras was installed in positions to provide full perimeter monitoring, monitoring of all entrances/exits and car park surveillance.
We decided on the Honeywell system due to its ease of installation and the fact that it is very easy for FM services and security staff to use. On past experience, various systems have been too technically involved for the staff to use, however  the Honeywell system has been successfully employed by MECE on a number of HMP Prisons and schools.

The system is designed to the AR’s, CP’s and design specification. After various discussions a “Be Spoke” access control system was designed and installed by MECE to cover all areas of the hospital, including the private rooms, corridors, theaters and plant areas.

There is nobody more qualified than the end user to understand their requirements and needs, and with MECE specialist help and advice as a  SALTO Integrator, every room had a Salto Lock installed, with Strategic Hard Wired (Live) door Readers installed to transfer and Receive information and data.

This Access control system comprised of proximity access card readers to be fitted at various positions and doors. These doors are controlled by field door controllers located adjacent to the doors (one controller per door) which in turn is linked via a standalone IP data network to the front end PC.

The second part of the access control system is the various doors around the site that were to be “locked down”  at various times of day. These doors are controlled by field door controllers that are linked back to the central PC via the same IP data network as described above. The PC software is programmed for the Requested doors to release or lock down as required by the client either as a global command to every door, groups of doors, or by a door by door basis.

The doors are held looked by specifically designed mag-locks which were selected to suit the different types of doors found around the hospital.

Every private patient room has a Salto handle set installed , with a battery function for some 10,000  operations/events.

MECE proposed the ever reliable BPT System for the hospital. The system consists of numerous  standalone Audio/Video intercoms with bespoke manufacture of the housings to incorporate the Salto access control readers.

In general, the systems are installed between the entrances of the buildings/floors to the relevant nurse station or reception area and are fully integrated with the access control system to provide

A bespoke nurse call/staff attack system was designed and installed to comply with the requirements of the client and specification.

Due to integration within the ‘Bedhead’ trunkings it was agreed that we would use an Austco Medicom system, as Austco had worked with the trunking manufacture on previous projects.

Within each building, one staff base is equipped with a fully featured staff station control panel which will indicate the origin and call types of calls within the department. All other staff stations and reception areas have colour co-ordinated programmable displays controlled via the buildings master panel.