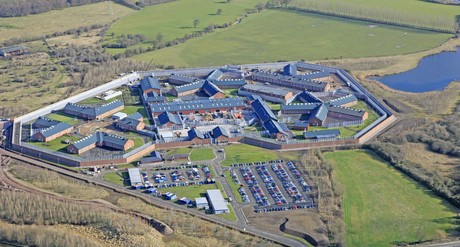 Phase 1 was built on a Greenfield site in 2001 HMP Dovegate is a private CAT B prison run by Serco Built by Skanska.

Inside a single perimeter fence are the Main and a Therapeutic Prison, with all Other facilities, Dinning, Gym, Activities, Workshops, Infirmary, Visitors center, Visitors reception, Industries Building ,  Energy center , Library and Chapel.

A new “ K” Wing consisting of 240 Cells and extensions  to all of the existing buildings to accommodate an increase of inmates, within a fully working prison.

All cells have cell Fire detection as well as Full L1 Coverage elsewhere.   This was the major Goal to achieve without compromising Security and the civil rights of the Inmate. To provide an early warning Fire detection and Alarm system that would be functional and not be used in any way as a malicious tool by an inmate.

The Main prison consisted of 3 House blocks on Phase 1 with another 2 house blocks added in 2008 with extra facilities to accommodate another 380 inmates i.e. Gym, and extensions to all other facilities. While keeping  the security of the Prison at the forefront of any new building addition.

Two of the house blocks have 5 wings built round the control “bubble”. With a “K” Wing added in 2008.
Each wing has 30 cells nearly all designed for single occupancy and have communal showers and within the cell a washbasin and toilet.

The third house block has 4 wings built round a control “bubble” K Wing . This house block has a dedicated drug treatment wing, and holds trial and remand prisoners. All wings have the same facilities as the other house blocks with the added exception of in cell showers.

The Therapeutic Prison (known as the TP) is separated from the main prison by an internal fence. The residents are accommodated in 3 house blocks which all have single occupancy cells within cell toilets and showers.

MECE had already established that the complex C & E would require a very powerful & reliable fire alarm network and to this end the “ Kentec  Syncro “   product had been selected with Hochiki devices   . With 24 Buildings to cover over a Network, it was agreed with the Consulting Engineers (HBS) that we would install 1 main Panel and 18 Other Panels.  80 % capacity could not be exceeded to allow for Future expansion on Phase 3.

The most complex issue of design related to the Cell detection. Wagner  & Eurofyre ASD was considered as per the NOMS Register and recommendations. Numerous meetings , discussions and site Tests and Mock ups  were held on and off site with the client (SERCO),  the Builder (Skanska), the Electrical Contractor (SRW), the Consultants (HBS) and the BMS Contractor (DMS) until we had all the information necessary to enable us to design the system  and install.  The actual capillary was hidden and concealed. Further meeting were then held to sign the design off to enable the fire alarm installation to commence.

Obviously with a shower in the cell room, Steam was a major factor and this was overcome with site tests and recommendations for all parties, with all having major experience in a prison environments.

The Wagner Micro-Sens detector was preferred by SERCO for this application as it had a suitable lead time and also had other unique factors in its favour i.e. quite running fan, 4 cells per unit/device, etc