“Our commission has been to restore the grandeur and dignity of Aldwych quarter and recapture some of the enterprising spirit that saw Aldwych and the broad boulevard of Kingsway raised at the beginning of the 20th century.

The raw materials were all there – the buildings are sumptuous with travertine walled, coffered ceilinged lobbies and a wealth of period detailing that has been restored in the largest refurbishment project in central London.

“The successful completion of the Aldwych Quarter scheme is testament to the spirit of collaboration that has existed from the very outset. The innovative way the project team tackled the technical and logistical complexities of delivering a scheme of this scale and historical sensitivity has produced a highly beneficial outcome for early occupation of these keynote buildings.”

One of London’s largest refurbishment projects, the Aldwych Quarter scheme, which encompasses Bush House – the Grade II listed former home of the BBC World Service – and three adjoining buildings on the Northbank in London was been successfully completed by MECE Fire and Security and Siemens 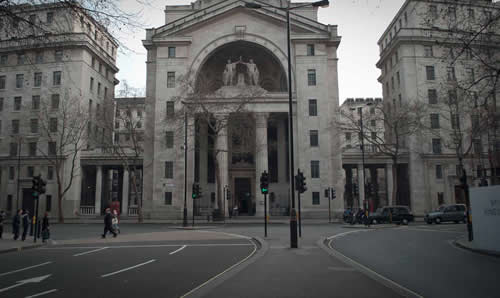 “Aldwych Quarter is a survivor from an age of grandeur and dignity – Bush House was the most expensive building in the world when it opened as a centre for transatlantic trade in the 1920s. Our refurbishment restores this unique heritage and has created a high quality office space ready for the demands of 21st Century occupiers.

With  a Cat A office accommodation across four buildings, Aldwych Quarter provides highly flexible, modern office accommodation in a key strategic central London location.
The MECE  scheme included the  Fully  Integrated Fire and Security systems  by Siemens  across the Four Buildings at a cost of £ 1.5mllion for a  shell and core .

Completed at a Building cost of £10 million, Bush House was proclaimed as the most expensive building in the world when it opened its doors in 1923. Together with the other three buildings in the Aldwych Quarter, it was commissioned by American Financier Irving T Bush and built to designs by American Architect Harvey Corbett.

The Fire and Security installation and commission and extensive Demonstrations, with Offsite FAT Tests  were completed in just 34 weeks – a significant achievement for the MECE  team given the scope and scale of the Aldwych Quarter refurbishment project . Overlapping programmes enabled the MECE team to gain early access to the four  buildings, undertaking vital design validation and consultations early to improve handover dates  with these  Listed Interior as well as exterior  buildings . This method was adopted as part of an all-encompassing risk management strategy, which reduced the project duration by a unbelievable  5 Months.

Bush House, Strand House, King House and Melbourne House were all completed by the deadline dates and all dates achieved by Skanska SRW and ISG.

MECE Designed installed and commissioned a comprehensive Fire and Security Package to NSI Gold and LPS 1014 standards on the Bush House project. Commendations came from LPS 1014 and NSI Gold for the standard of design and installations by MECE, including the State of the Art Siemens technology MM8000 Graphical front end.

After many meetings and discussions with ISG and SRW it was agreed that the Siemens Fire and Security package was best suited for this market place, for full Integration between both intelligent systems. This was defined by its second to none technology and future expansions to come once the tenants start to occupy this Iconic Building. MECE now service and maintain all the systems within the building.

“It was important for MECE To win this project as MECE service and maintain many iconic buildings in the South of England & London . Bush House is one of the most iconic buildings for British Architecture in the UK of the 20th Century. This Old BBC  Headquarters is world renowned for its Art Deco architecture and it was a serious challenge to hide cabling and devices in this listed building, but still keeping the overall design to meet LPS 1014 and NSI Gold standards.”
MECE had consultations to pre fabricate areas so that as little or no disruption would be experienced during the commissioning and final finish stages of the project.

“We do strongly feel that with the help, cooperation and teamwork ethic of ISG, Skanska  and MECE, we all achieved a building with a state of the art fire and security system that will be in working order for many years to come and to be proud of.”

The Siemens Fire and  Si pass Security systems were interrogated via  a  Full GUI Graphic MM800 which  makes for a seamless user Friendly system…  The ease of the GUI is that the Systems over the whole site  four buildings can be lead from one central point or four individual locations or in time off site if needed.

The state of the Art Siemens technology in Fire and Security products,  was and integral part of MECE’s offer at Tender stage and definitely helped secure this Prestigious  £1.5m  project .

The  Cerburus FD720 equipment enables ease of programming and  the best detection technology on the market.  The Siemens VA system was incorporated into the Networked Fire system via a MM800 GUI for ease of evacuation being the route with Voice and speech being proven in evacuation situations rather than just  Sound alone.  This gives a clearer indication of an evacuation complying with DDA regulations also.

With over 1,600 devices on the fire and 950 Speakers the Shell and Core Cat A  was a substantial  installation over  the four buildings simultaneously.  Future expansion of  up to  6000 devices on the Fire and 5500 in the VA systems will easily accommodate any future CAT B fit outs on the existing main panels.

On conclusion of our /Fire VA installation, the complete system was tested and commissioned and the client and consultant again witnessed the system. Although it was not a requirement, this also included a number RASTI tests that were used to demonstrate good speech intelligibility of the VA system.

Off site (FAT)  Factory Tests were Incorporated to demonstrate to the client what the systems is capable of and whether the systems is fully compliant with the Design and the  Specification.. All the system were fully loaded with every single  device  and  a full Cause & Effect was demonstrated over 4 days of stringent tests by the consultant  Hilson Moran,ISG, Skanska  and the clients IC.

VIGIL OmniCare  was the  MECE  preferred Disabled Refuge and WC  Alarm Combined system by Baldwin Boxall  as the Four buildings can be networked  linked or as standalone  systems, wit over 118 devices on the 4  systems

INTRUNET SPC ;security devices  and  E Line PIR’s  were used throughout the security design  for full coverage to NSI Gold with British and European Standards being met.  With over 300 devices installed and full coverage Grade 3 system was achieved in the listed interior building. Cables were hidden and no cabling was visible.

VECTIS CCTV and NVR’s  ;Range of products for the correct IP camera system for the Correct Environments, with over 250 Internal  VP Domes and 17 Vectis  NVR’s installed in 4 security control rooms and video wall surveillance designed for the User.  External coverage was agreed with the Local Westminster Authority as this is a Grade 2 Listed Building giving a Overt  CCTV system with as much Convert as possible  due to the Listed status

SI-PASS ;Access Control System  for the full integration being completed  over the four buildings via the Systems GUI Graphic and the  MM8000. With over 180 ACS doors and again due to the Listed Nature of the Grade 2 building mag- locks , Readers and controllers etc  had to be Hidden as far as humanly possible as not to disturb the Old feel  of the  building.  Thought , even went into what  type screws were used on the fixing of the Mag Locks on the door frames in certain areas.

VIDEO-INTERCOM; DDA Compliant was designed with BPT and preferred due to its DDA compliance form 1 x X1 unit over and IP Solution. Control will be determined purely on a programme being installed as by the clients Preference at a later date.

Over  6,500  man hours were worked on site without a reportable accident and at peak periods up to 45  operatives from  MECE  worked alongside one another to deliver this impressive project.